We will offer the following practical courses (in German) in the upcoming summer semester.

Participants will plan an empirical study and present their study plan in the form of a project proposal. Important topics covered in the course include the following.

The above skills are important for writing bachelor and master theses – we suggest that students complete one of the courses beforehand. The lectures will be held in three workshops. Introduction and first lecture on March 15th, 2016 from 15-18h at the INSO library (Wiedner Hauptstr. 76 / 2nd. floor).

Last semester’s design task of the Human Computer Interaction seminar at DECO was to create, prototype and evaluate innovative solutions for individuals and groups in need. The seminar was based on results from a 2-day hackathon event called Helpathon, organised by the Research Group for Industrial Software (INSO, Vienna University of Technology).

END_OF_DOCUMENT_TOKEN_TO_BE_REPLACED

We are happy to announce a special event called “Helpathon“, a 2-day hackathon event for creating and prototyping innovative solutions to help people in need. The event brings together students and stakeholders from different areas to challenge the possibilities of Information Technology in order to support affected people. A lot of difficulties arise from lack of coordination, communication and access to information. Information Technology seems to be well-suited for finding solutions to bridge the gap between those who offer help and those who are in need.

At the weekend of Helpathon, innovative concepts will be created and prototyped in the following areas:
• Asylum, migration and integration
• Helpfulness & humanity in everyday life
• Management of disasters and natural disasters

Registration is free for all participants. For more information regarding the event and the registration, please visit our website: www.helpathon.at (German)

We will offer the following practical courses (in German) in the upcoming winter semester.

Students will learn how to plan an empirical study in HCI and how to choose appropriate research methods. These skills are important for writing bachelor and master theses; we therefore suggest to complete one of the courses beforehand. The courses are also helpful for students interested in publishing a scientific paper because they simulate a conference’s peer review process. Students may choose amongst DECO’s research topics or choose a topic of their own, including (but not limited to): Persuasive Computing, Usable Security, Public and Pervasive Displays and Ubiquitous Computing.

The courses will be held in three workshops. Students will elaborate a written project proposal (similar to exposés needed for diploma theses). Introduction and first lecture: 20th of October 2015, 14-17h at the INSO library (Wiedner Hauptstr. 76 / 2nd. floor).

END_OF_DOCUMENT_TOKEN_TO_BE_REPLACED

Students interested in taking a practical course (Seminar, Praktikum etc.) or in writing a thesis with DECO are warmly invited to the upcoming presentation of topics (“INSO Themenvorstellung”) on Wednesday, Oct 14th, 2015 at HS15.

We will present several topics and current research areas in innovative human-computer interaction. These topics provide plenty of opportunities for students to participate in this interesting and dynamic field. We are looking forward to meeting you!

Last semester’s design task of the Human Computer Interaction seminar at DECO was to create, prototype and evaluate a location-aware mobile application that uses open governmental data (OGD) from the OGD catalogue of Vienna.

A team of four students completed the seminar, resulting in a creative location-based mobile game “ViennaCop” for Android.

The goal of the game is to catch criminals by collecting information at various locations in Vienna (provided by open data records). Clues about the crime act are retrieved by scouting locations in real life.

The game has been published and can be downloaded on Google Play.

We proudly present the mobile application concept of our student team:

“ViennaCop is a geo-location based Android game, created for Vienna. The main goal is to catch a criminal by collecting hints that give the players (who play a cop) information about the hiding place and visual nature of the criminal. These hints are located all over Vienna. For this purpose open data records, like locations of hospitals, parks, police and metro stations, are used.
There are also some shortcuts that give players more flexibility in the game. Because players have to go to the points of interest (to get new hints) in real life, they are supported by a virtual colleague that players can send wherever they want (this is only possible once). Another shortcut is related with finding the murderer’s weapon. Players get up to three new hints if they find and inspect the weapon.
After having collected enough hints regarding the hiding place of the suspect, it is possible to delimit the criminal on five prime suspects. At this point players have to decide if they already have enough information to identify the correct suspect who committed the crime. If this is not the case players can go on with the investigation until they have collected enough hints regarding the visual nature. However, it is also possible to make a guess and follow the instincts of a good cop.” 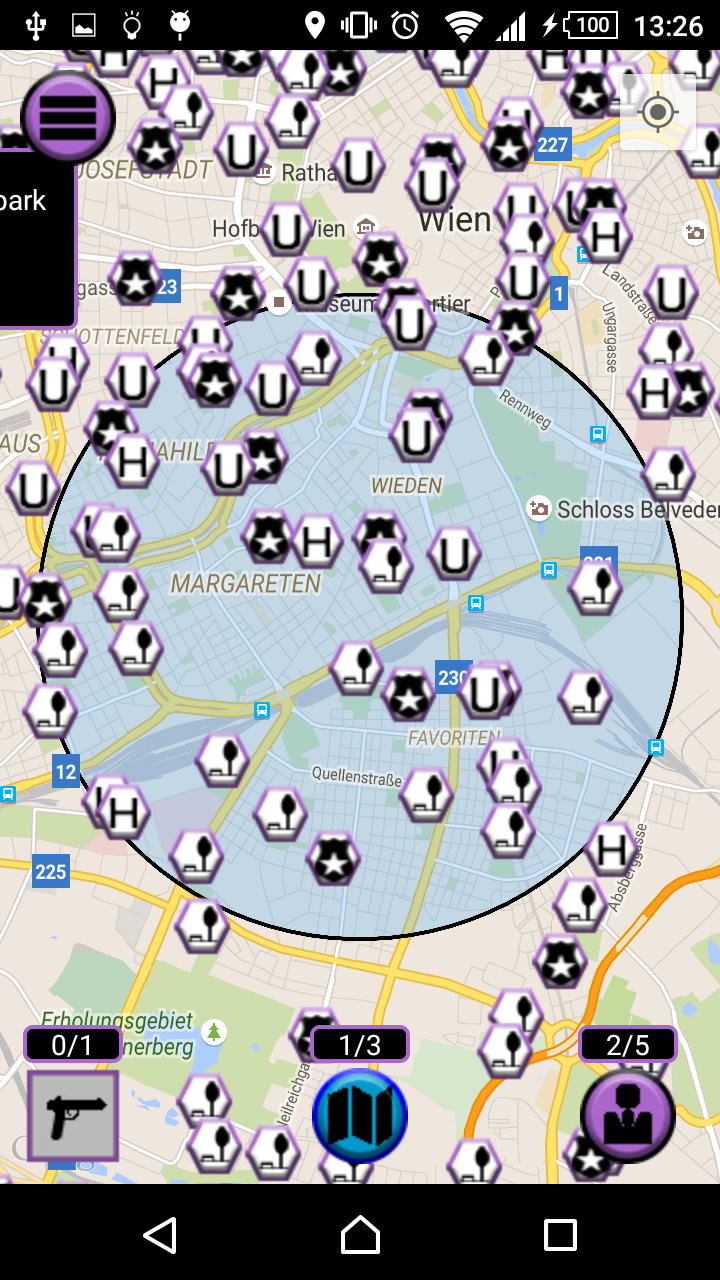 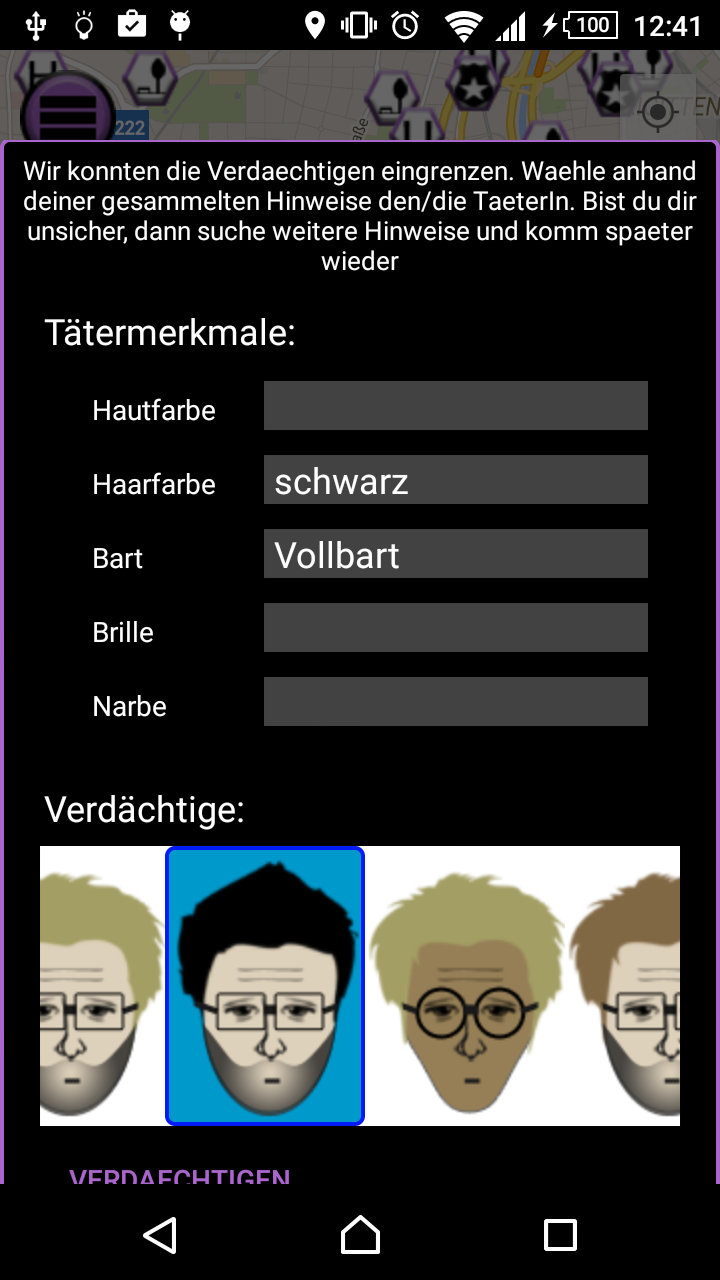 Mobile applications provide increasingly complex functionality through form-based user interfaces. Given the small screen sizes of many mobile devices, this requires effective solutions for navigation. Our recent paper about navigation in long, form-based UIs on mobile devices [1], which will be published at the INTERACT’15 conference, compared four navigation design patterns on mobile devices. Results indicate that Scrolling should be avoided in favor of other designs that provide a better overview, possibly using tabs, menus, or collapsible fieldsets.

END_OF_DOCUMENT_TOKEN_TO_BE_REPLACED

Our study “Gamification of Online Surveys: Design Process, Case Study, and Evaluation” [1] was accepted for publication at the Interact 2015 conference.

Gamification has been proposed to make online surveys more pleasant to fill and, consequently, to improve the quality of survey results. We applied our gamification design process [2] to an existing survey targeted at teenagers and young adults. This allowed to formulate lessons learned regarding our design process; results strongly support the process’s usefulness and applicability. The gamified survey was evaluated in a study with 60 participants regarding the psychological and behavioral outcomes of gamification.

END_OF_DOCUMENT_TOKEN_TO_BE_REPLACED

Students interested in taking a course or writing a thesis with DECO are warmly invited to the upcoming presentation of topics (“INSO Themenvorstellung”) on Wednesday March 18th, 2015 at 17:00 at HS15. We will present human-computer-interaction topics available for student projects, practical courses, and bachelor/master theses.

We’re happy to announce that the registration for this term’s HCI Seminar is now open. The topic for this term is the conception and prototyping of an innovative mobile application based on “open data“. A special workshop on Wearable Computing will be conducted related to the seminar’s topic.

You’ll have the opportunity to develop a prototypical application for a mobile platform utilising a user-centered design process. We provide a methodological framework and you can show your creativity in the practical implementation.

If you’re interested in participating, please visit the course website for further information about the topic, schedule and registration.

We would be happy to welcome you in our seminar.

DECO (Designing Comfort) is an interdisciplinary research team inventing and improving new forms of interaction with computer systems. We are part of the Research Group for Industrial Software (INSO) at TU Wien.